The reliable estimation of the pupil position in eye images is perhaps the most important prerequisite in gaze-based HMI applications.

While there are many approaches that enable accurate pupil tracking under laboratory conditions, tracking the pupil in real-world images is highly challenging due to changes in illumination, reflections on glasses or on the eyeball, off-axis camera position, contact lenses, and many more.

Human gaze behavior is not the only important aspect about eye tracking. The eyelids reveal additional important information; such as fatigue as well as the pupil size holds indications of the workload. The current state-of-the-art datasets focus on challenges in pupil center detection, whereas other aspects, such as the lid closure and pupil size, are neglected. Therefore, we propose a fully convolutional neural network for pupil and eyelid segmentation as well as eyelid landmark and pupil ellipsis regression. The network is jointly trained using the Log loss for segmentation and L1 loss for landmark and ellipsis regression. The application of the proposed network is the offline processing and creation of datasets. Which can be used to train resource-saving and real-time machine learning algorithms such as random forests. In addition, we will provide the worlds largest eye images dataset with more than 500,000 images.

Modern eye tracking systems rely on fast and robust pupil detection, and several algorithms have been proposed for eye tracking under real world conditions. In this work, we propose a novel binary feature selection approach that is trained by computing conditional distributions. These features are scalable and rotatable, allowing for distinct image resolutions, and consist of simple intensity comparisons, making the approach robust to different illumination conditions as well as rapid illumination changes. The proposed method was evaluated on multiple publicly available data sets, considerably outperforming state-of-the-art methods, and being real-time capable for very high frame rates. Moreover, our method is designed to be able to sustain pupil center estimation even when typical edge-detection- based approaches fail – e.g., when the pupil outline is not visible due to occlusions from reflections or eyelids / lashes. As a consequence, it does not attempt to provide an estimate for the pupil outline. Nevertheless, the pupil center suffices for gaze estimation – e.g., by regressing the relationship between pupil center and gaze point during calibration.

Undoubtedly, eye movements contain an immense amount of information, especially when looking to fast eye movements, namely time to the fixation, saccade, and microsaccade events. While, modern cameras support recording of few thousand frames per second, to date, the majority of studies use eye trackers with the frame rates of about 120 Hz for head-mounted and 250 Hz for remote-based trackers. In this study, we aim to overcome the challenge of the pupil tracking algorithms to perform real time with high speed cameras for remote eye tracking applications. We propose an iterative pupil center detection algorithm formulated as an optimization problem. We evaluated our algorithm on more than 13,000 eye images, in which it outperforms earlier solutions both with regard to runtime and detection accuracy. Moreover, our system is capable of boosting its runtime in an unsupervised manner, thus we remove the need for manual annotation of pupil images.

The input to the algorithm is a grayscale image. After normalization, a Canny edge filter is applied to the image. In the next algorithmic step, edge connections that could impair the surrounding edge of the pupil are removed. Afterwards, connected edges are collected and evaluated based on straightness, intensity value, elliptic properties, the possibility to fit an ellipse to it, and a pupil plausibility check. If a valid ellipse describing the pupil is found, it is returned as the result. In case no ellipse is found, a second analysis is conducted. To speed up the convolution with the surface difference and mean filter the image is down scaled. This operation is performed by calculating a histogram for all pixels from the large image influencing the pixel in the down scaled image. In each histogram, the mean of all intensity values up to the mean of the histogram is calculated and used as a value for the pixel in the down scaled image. After applying the surface difference and mean filter to the rescaled image, the best position is selected by multiplying the result of both filters and selecting the maximum position. Choosing a pixel position in the down scaled image leads to a distance error of the pupil center in the full scale image. Therefore, the position has to be optimized on the full scale image based on an analysis of the surrounding pixels of the chosen position.

The input to the algorithm is a grayscale image. In the first step, the color histogram is analyzed and the algorithm decides if he expects the pupil to be bright or dark. For bright pupils, the algorithm selects the curved edge with the darkest enclosed intensity value. This is done by refining the result of the canny edge filtered image with morphological operations. The remaining edges are analyzed if they are curved or straight. For the curved edges, the enclosed intesity value is calculated, and the best is selected. If the algorithm expects the pupil to be dark, a threshold based on the standard deviation is calculated. The image gets thresholded and a coarse positioning is performed similarly to the radon transformation. This coarse position is optimized by moving to near intensity values, which are darker or equal dark to their neigborhood. After the optimization, the image is thresholded by an increased threshold. All edges which are too far from pixels under the threshold are removed. The remaining edges get filtered as described before for the bright pupil. Starting from the optimized position the surrounding edges are used to fit an ellipse. 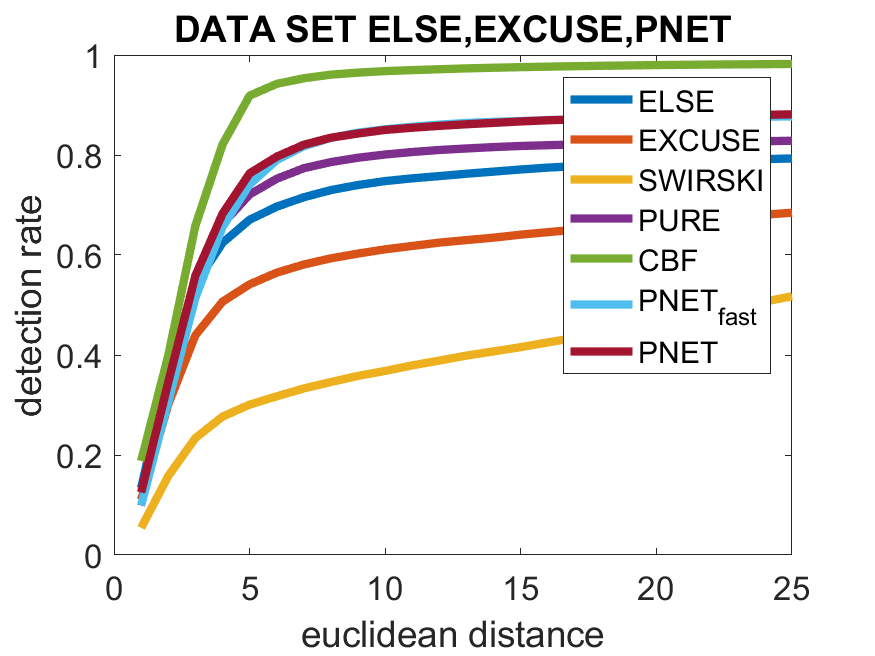 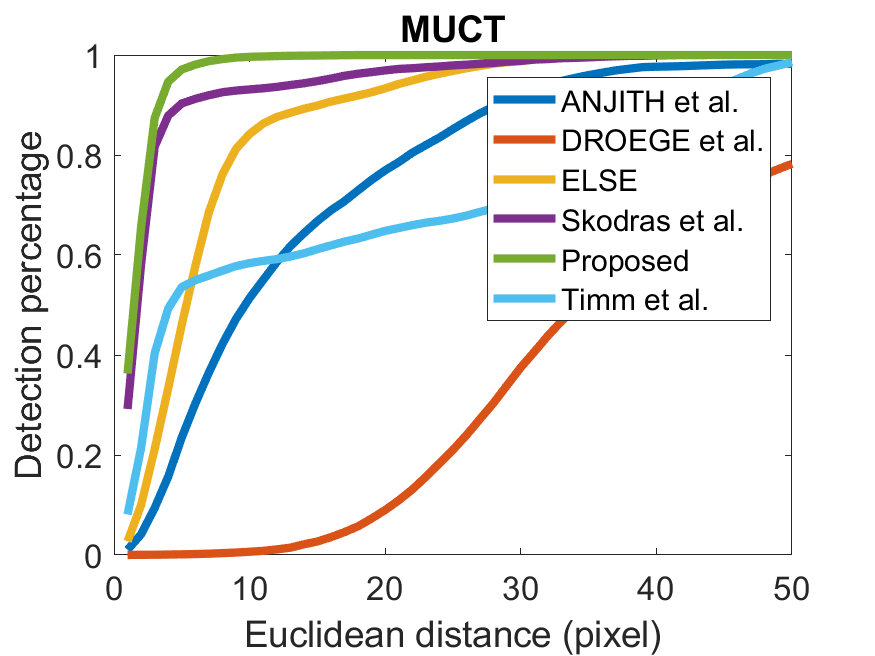 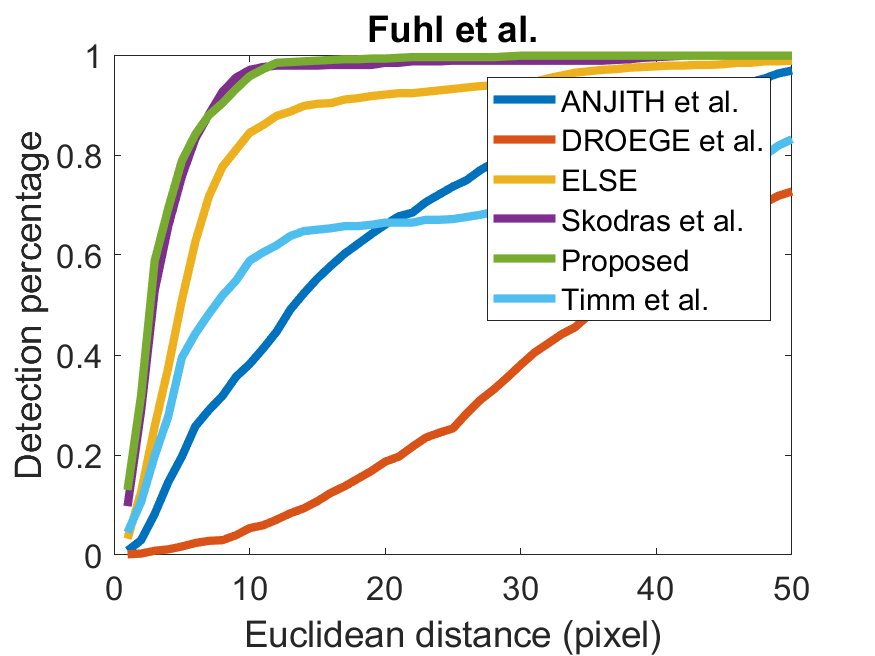 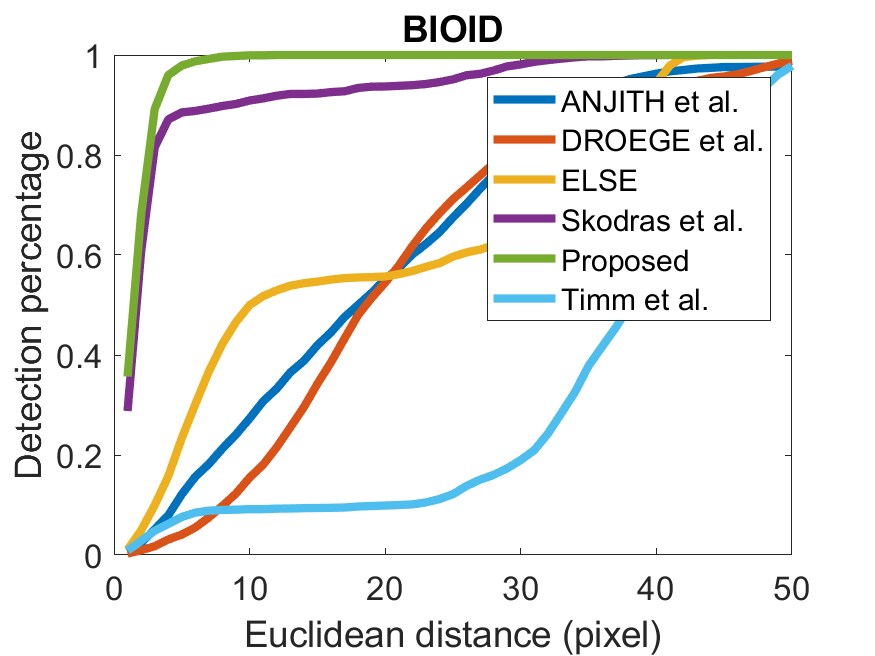 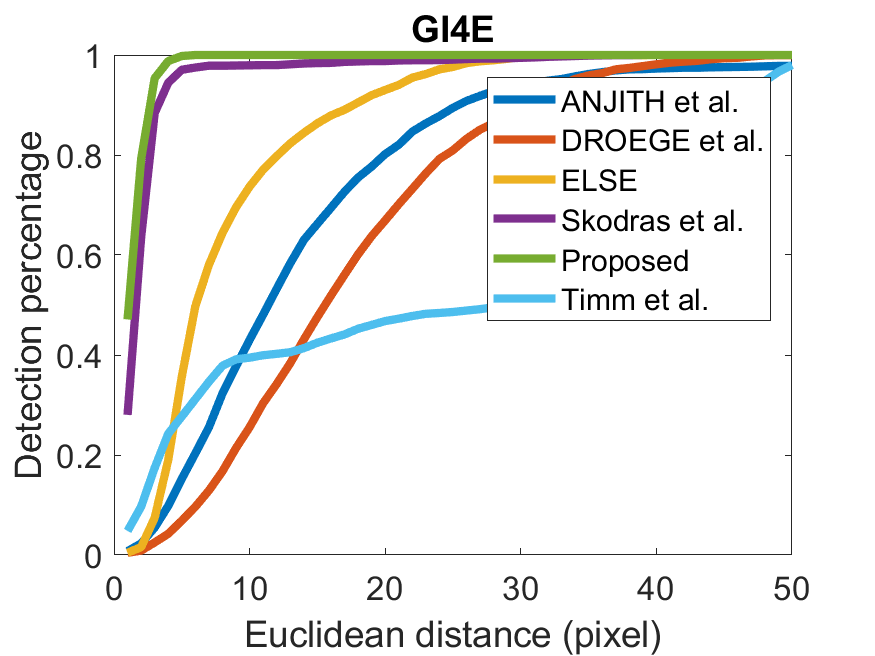 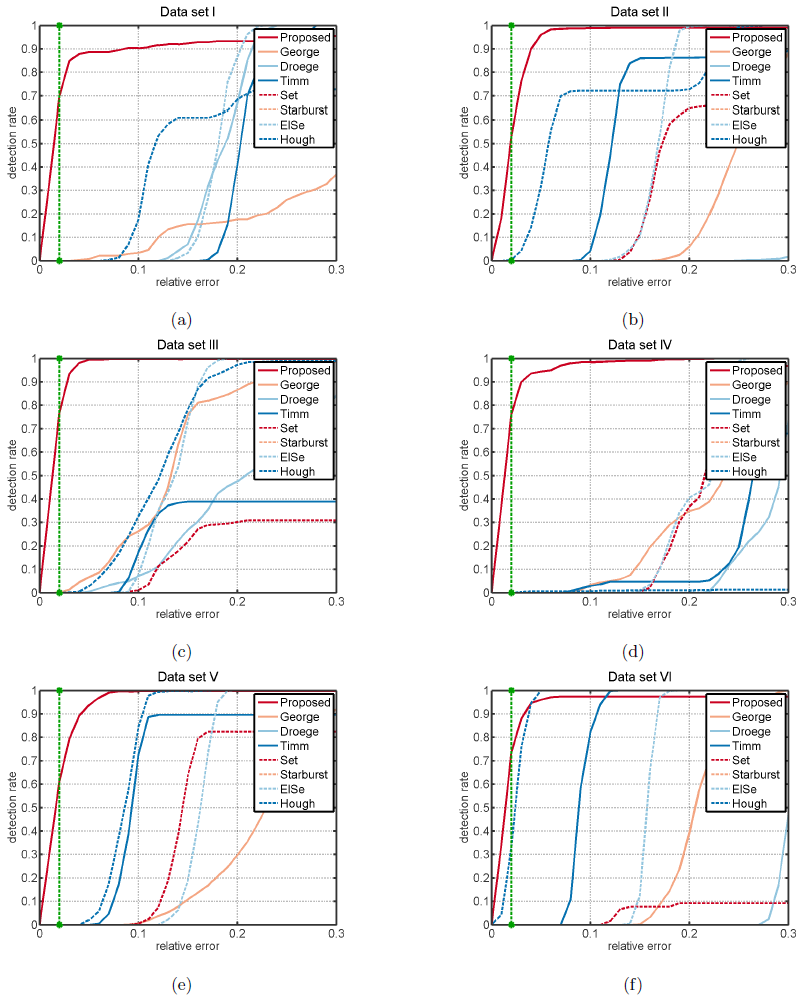